By YY Chen, Research Project Coordinator, Committee for Accessible AIDS Treatment (CAAT). This article originally appears in” Compass” Winter 2007 Issue by the OHTN, a community resource in HIV/AIDS-related CBR.  The theme of this issue of the Compass is on HIV and immigrant and refugee communities. Download Newsletter from OHTN 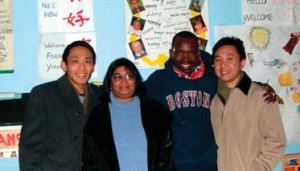 The HIV discourse affecting immigrants and refugees from diverse ethno-racial communities tends to focus on issues of screening and the identification of risk factors. There have been very few studies that have examined the lived experiences of immigrant, refugee and non-status people living with HIV/AIDS in Canada. Fewer still are studies focusing on this population that meaningfully engage them throughout the research process.

The Committee for Accessible AIDS Treatment (CAAT), a coalition of community-based agencies that works to improve the lives of immigrant, refugee and people without status who are living with HIV/AIDS, conducted community-based research in 2001 that has since led to innovative strategies in facilitating access to legal, health, and community social services for this population. Building on this success, CAAT initiated another community-based research project in the fall of 2005 to better understand mental health needs, and to improve access to mental health services.

As a partnership project involving Toronto’s five ethnoracial AIDS service organizations, immigrant, refugee and non-status people living with HIV/AIDS originally from South Asia, Southeast/East Asia, Africa, the Caribbean, and Spanish-speaking countries in Latin America are the focus of this study. The entire project consists of six interconnected components that are grouped into two phases. In the first phase, the research team will conduct focus groups, individual interviews, surveys and a peer empowerment exercise to examine social determinants affecting mental health, the capacity of existing services to address these determinants, and elements considered as best service delivery practices. Grounded by these findings, the second phase of the study seeks to promote inclusive mental health support by developing a training curriculum for service providers, pilot-testing and evaluating best practice models, and facilitating inter-sectoral collaboration and policy changes.

Improving access to mental health services by immigrant, refugee and non-status people living with HIV/AIDS will require a comprehensive strategy that involves collaboration among all stakeholders, including immigrant, refugee and non-status people living with HIV/AIDS, service providers, and policy makers. It is therefore important for projects like this to continue being championed by funders so that the voices of marginalized populations will have a channel to emerge, and a coherent action plan leading to an inclusive mental health service model can be properly developed and implemented.

“The CAAT project has been an eye opener and a great learning experience, because I have been able to not only get to know the various concerns of immigrants and refugees living with HIV/AIDS, but I have also been given a challenge to address various needs and issues on a personal and community level… I have been impressed with the research team as a whole for the complete dedication and enthusiasm towards the success of the project. The project has recognized the greater and meaningful involvement of people living with HIV/AIDS and included ethnoracial communities of diverse backgrounds; to me it is a milestone in community based research.”
Henry Luyombya, Peer Research Assistant

“There is never a refugee or non-status person living with HIV/AIDS who doesn’t have a problem and each and every story [that I heard] describes different versions of the same sad story. I personally would love to see some changes through our research project which could change and make a great difference to a lot of people.”
Amutha Samgam, Peer Research Assistant

CAAT is committed to promoting the health and wellbeing of people living with HIV.