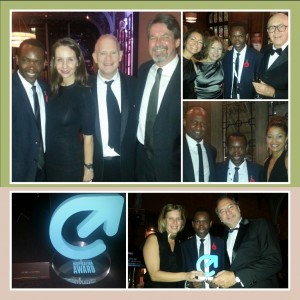 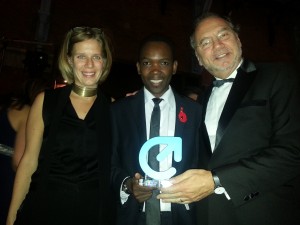 On Saturday, 2nd November 2013, Staying Alive – an international MTV program, celebrated 15 years of fighting against HIV/AIDS. The MTV Staying Alive Foundation organized an extravaganza to showcase its achievements. The event took place in London, England at the St. Pancras Rennaissance Hotel and was attended by hundreds of celebrities.

CAAT Champion, Henry Luyombya, was honored with the 2013 MTV Inspiration Award for his longstanding commitment towards raising HIV awareness among young people and reducing HIV stigma in society.

When we asked Henry what the MTV Inspiration Award meant to him, he replied after a long pause of reflection. “Inspiration is like a life force that keeps multiplying,” said Henry, “In 2003, I was invited by MTV to interview Mr. Nelson Mandela for a special one-hour Staying Alive program. At that time, I was getting very discouraged about the HIV prevention efforts in Uganda. But on that day Mr. Mandela re-ignited my hope and passion. He said, “The stigma is something that kills human beings, sometimes far more than the disease [HIV/AIDS] because that stigma indicates to your community that you are no longer an ordinary human being, you are a human being to be avoided, and that’s painful.” Mr. Mandela’s words helped me understand why it was so challenging to do HIV work in my communities.”

Inspired by Mr. Mandela, Henry himself became a force of inspiration. He was re-energized and motivated to continue the work of eliminating HIV stigma. He persuaded Bill Roedy and Georgia Arnold of MTV to seriously consider how the Staying Alive program could be transformed to reach a wider audience, particularly young people. Bill and Georgia were inspired and determined to make a tangible impact on HIV. In 2005 their determination materialized into the MTV Staying Alive Foundation, which supports grassroots HIV prevention projects led by young people across the world.

Aside from his serious speech and quiet reflection, Henry had fun mingling with the celebrities. He was thrilled that the award was presented by Patrick Viera, former soccer star, World Cup winner, and Manager for Manchester City’s Elite Development Squad.

Henry was proud to share with others the HIV advocacy and stigma reduction work done by CAAT in Canada. He also could not wait to come home to his family and the CHAMP team in Toronto!!!

CAAT is committed to promoting the health and wellbeing of people living with HIV.